Much has happened since I arrived in Jaipur, so lemme dig in…

I have been volunteering with an organization that runs a school for street kids in a neighborhood outside of Jaipur. They own the school and a homestay, which are about 7km apart. If you’ve never stayed in a dormitory situation in a developing country, its kind of like camping indoors. I share a basic room and bathroom with two women (from Italy and Sweden.) When I say basic, imagine a linoleum floor, four walls, metal bunk beds, a dense pillow, bottom sheet, and a heavy, dusty blanket. Because its winter here, people! In the common area, there are plastic cushions on the floor to sit for dinner with individual tiny tables about six inches off the floor. Too short to stick my legs under, sadly. A tasty vegetarian lunch and dinner are prepared for us daily and we are responsible for cleaning up after ourselves. This includes a regular wash with soapy water and then heating the kettle to pour boiling water over our dishes. You know, to be safe. No trash bags are provided so we improvise – empty cereal boxes work well. Every morning, we remind the ‘house mom’ to turn on the water so we can do things like flush the toilet (but not with toilet paper, this is thrown in a bag (or cereal box!) This is common in many developing countries without proper sanitation, so I’m used to it. Much like the electricity going out at least once a day.) We wash our clothes in a bucket – after only a day in the dust, the water turns a murky brown – and hang them to dry up on the roof. Where they get nice and dusty again. Circle of life!

When we arrive at the school in the morning, after an auto-rickshaw drive that has become second nature but objectively, is still slightly sketchy and loud, the kids are doing their physical exercises. Then classes separate and my 4-5 kids sit and wait patiently to be taught English.

I lie. There is nothing patient about the 9-11 year olds in my group. They are rowdy. They are also smart enough to regurgitate what they’ve been taught without truly understanding context or meaning. Maybe that is how learning starts, non? We’ve been working on emotions, body parts, and what they want to be when they grow up. This is a little heartbreaking as one of them wants to be a cricket player and he doesn’t seem to be so naturally inclined. But hey, dreams are dreams, right? We practice reading and writing, and then about 5 minutes before the break they start asking “Didi, didi, time? Time!” Didi is like ‘older sister’ but also teacher in this case. They want to know how long before they can go play cricket or badminton, and they never want to come back because math follows break and if you think learning math on its own can be tough, try learning it from a native English speaker when you barely understand English.

What I have found most challenging here is the lack of curriculum. Because this is not a government run or private licensed school, there is no required curriculum or teaching agenda. How can you give a test on Friday when you’re not building off on previous information? Its not connected, its isolated. There is just one full-time teacher, who hopes to take his test soon to become a public school teacher. Some days 10 kids show up, some kids 30. It depends on what is going on in their family’s lives. The resources are limited, all coming in forms of donations. They do not accept financial donations or do any fundraising, because of the complicated status of an NGO working under a for-profit company. Their hands are tied. And while they have the best of intentions, it is difficult to see the potential because real change can only happen in small, incremental steps. Digital learning might go a long way to bridge the gap.

Another challenge is that the kids are often hitting each other. It starts out with nasty, cutting words first. I can’t understand Hindi, but I know what it looks like when someone is talking shit. Then one of them reacts, and the next thing you know, they are yelling and smacking the shit out of each other. No tears, just a lot of anger. When I had my orientation, I was told not to smile at them (and not to smile at any men, but I’d already received that memo.) I’m generally a happy, nice person so it was difficult to pull this off but I get it – we don’t want them to think I’m weak because they won’t listen. The thing is, culturally it seems the teachers here are strict. Forceful even, to the point where they threaten to hit the kids in order to get them to do as asked. So, of course, that is how they react with each other. And I would imagine the scenario could be similar at home. Truly, though, they just want to be held, hugged, and played with like most children.

In other news, I made a friend when I arrived in Jaipur who looks uncannily like my older sister Kathy. We did some traveling together this past weekend, photos of our adventures and the children from school below.

Other observations and things I forgot to previously mention:

These are my students – Komal, Sahil, Raghu, and Rohit. 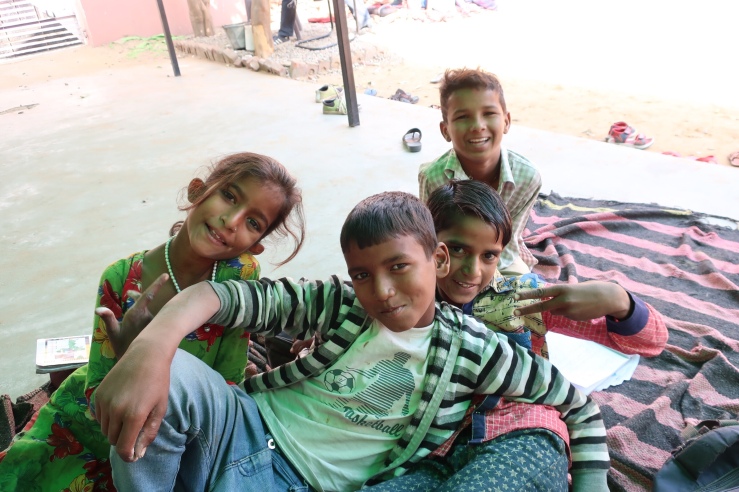 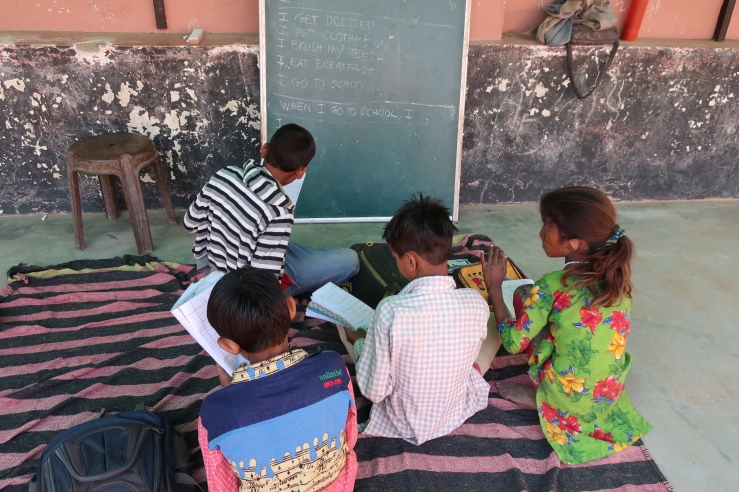 And these are some other cute nuggets we play with during the breaks. 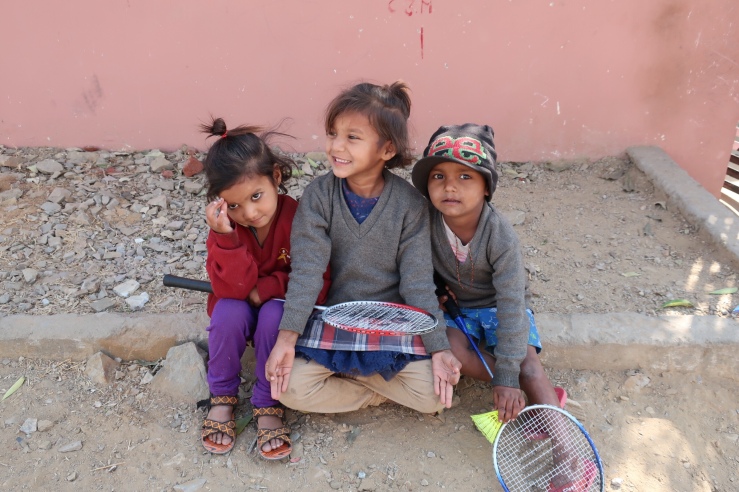 This is me and Daniela at the Anohki Museum, which is dedicated to the art of hand block printing. 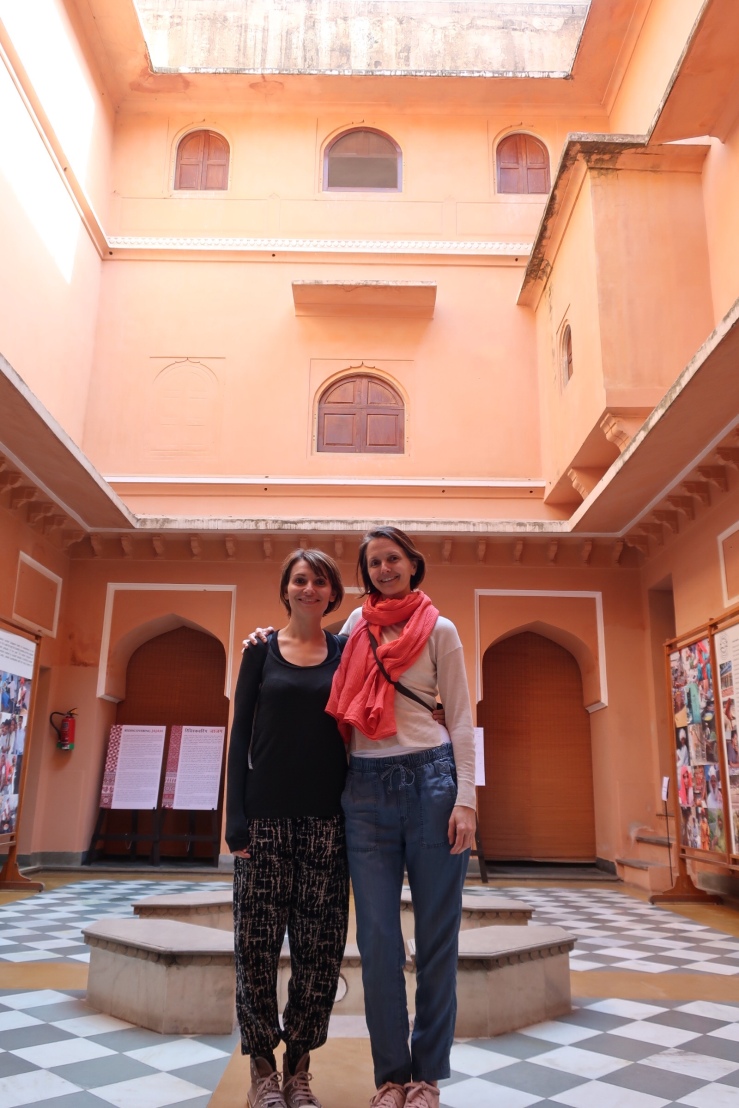 This is Amer Fort. So big. And you can make out the ‘little wall of China’ that surrounds the old city.

These are beautiful elephants that we did not ride. Fortunately, more and more travelers are getting hip to the mistreatment of animals for use by tourists.

Lots of crazy detailed design within the fort, as well as the City Palace, and Hawa Mahal. 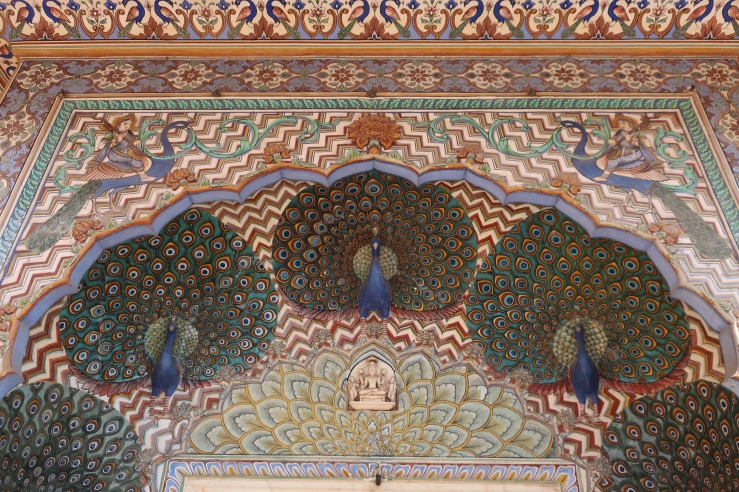 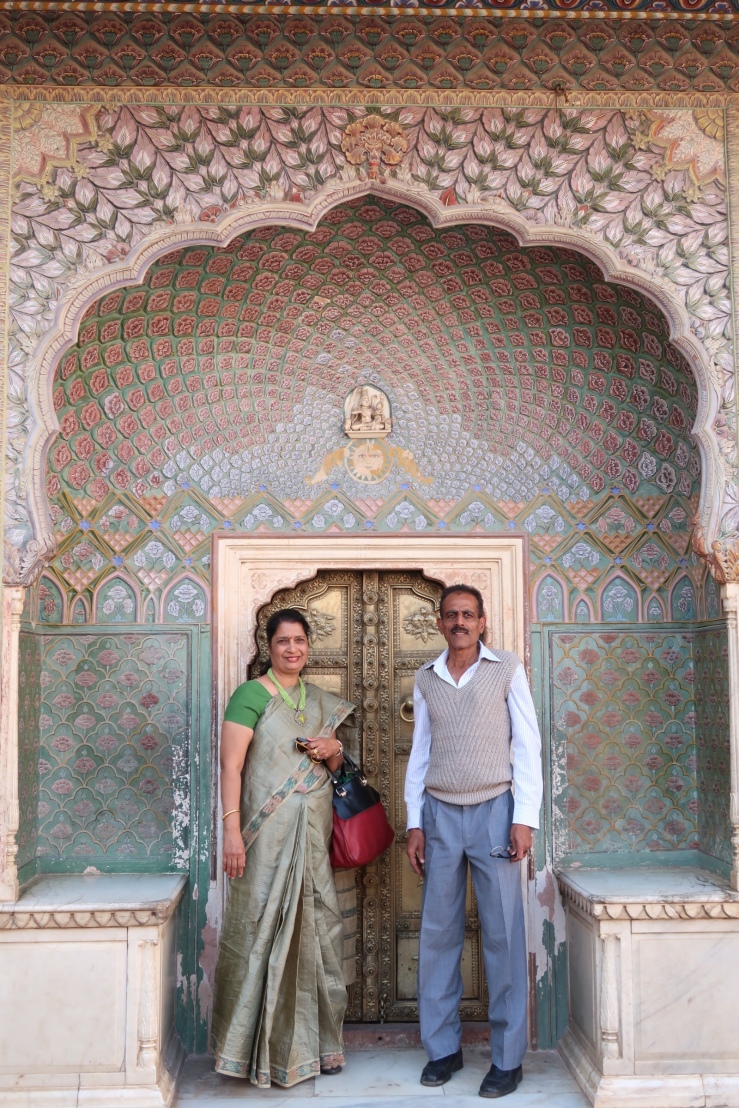 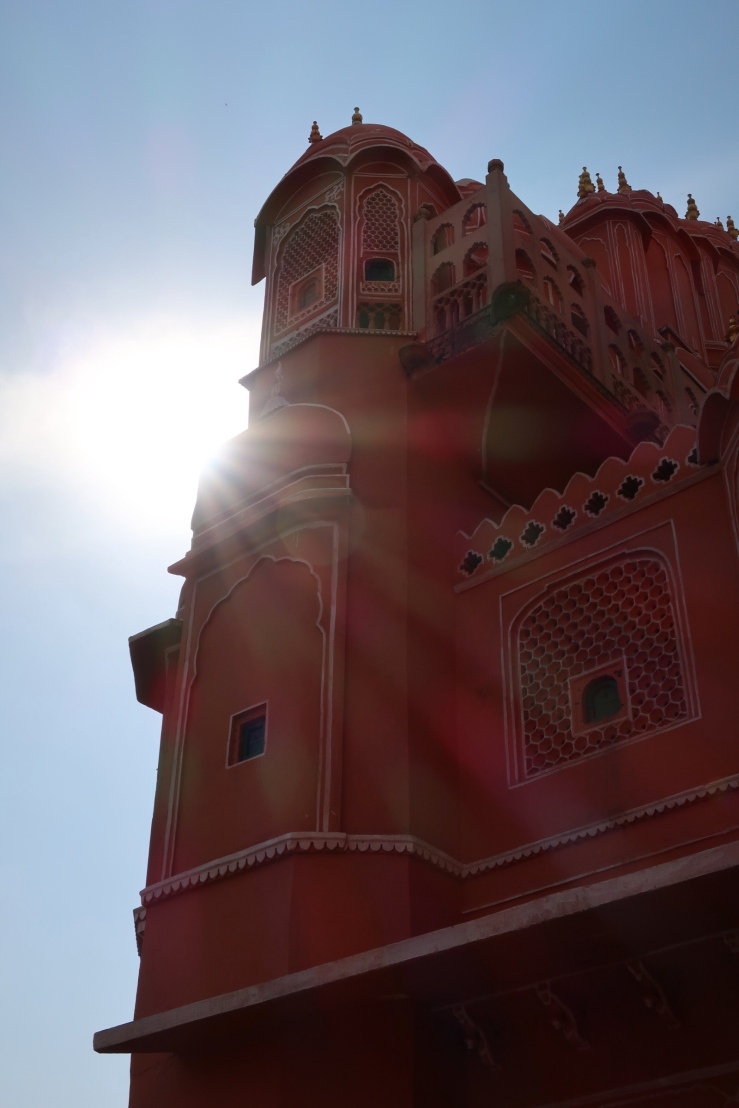 Below is the walk toward the Govind Dev Ji temple. It is dedicated to Lord Krishna and devotees pray here seven (7!) times a day.

Funny story. We got in line to get tickets for the temple. The lines are separated by men and women. So, we are waiting patiently. I am admiring all of the bright colors on these women. I smell this awesome sweet buttery smell, and I’m hungry and damn doesn’t that smell good? As we get closer to the window, we find out the line isn’t for tickets, its for food. The temple isn’t open for another half hour and these people needed sustenance. Lesson learned.

I can’t properly describe this and the photo below is shit but hear me out. This place gets up to 5,000 devotees per day. Everyone calmly walks into the temple and sits on the ground. We got there at 12pm for 12:30pm start. There were some small groups of people singing songs and clapping but generally, the mood was very calm and quiet. At 12:28pm, curtains were drawn and exposed were two small puppet-like figurines – of Krishna and his most devoted follower.

AND THE CROWD GOES WILD.

Everyone is up on their feet, praying, singing, filming, moving quickly toward the centerpiece. We are moved along, like in a mosh pit. Daniela and I are pulled along by a woman who insists we get up to the very front to see for ourselves. It becomes slightly claustrophobic but somehow we are spit out of the chaos. We follow the followers, who walk in a circle around Krishna’s stage, where they touch the wall with both hands and rest their foreheads while saying prayers. They touch the locks and chains on the doors surrounding Krishna, and then they are on with the rest of their day. 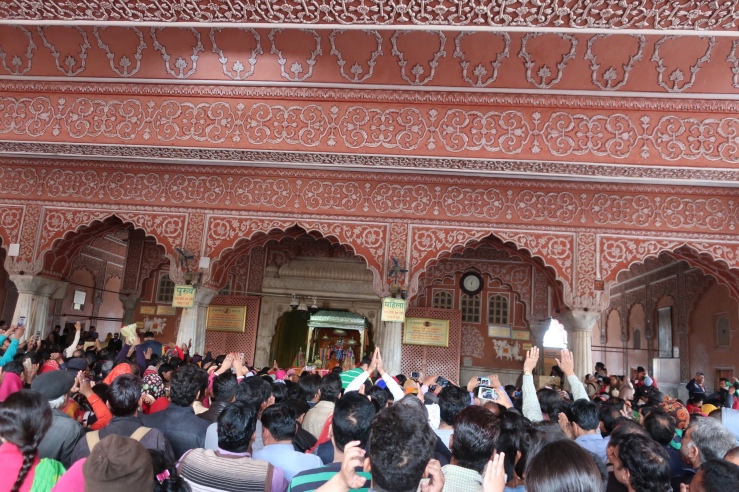